Thank you for reading! 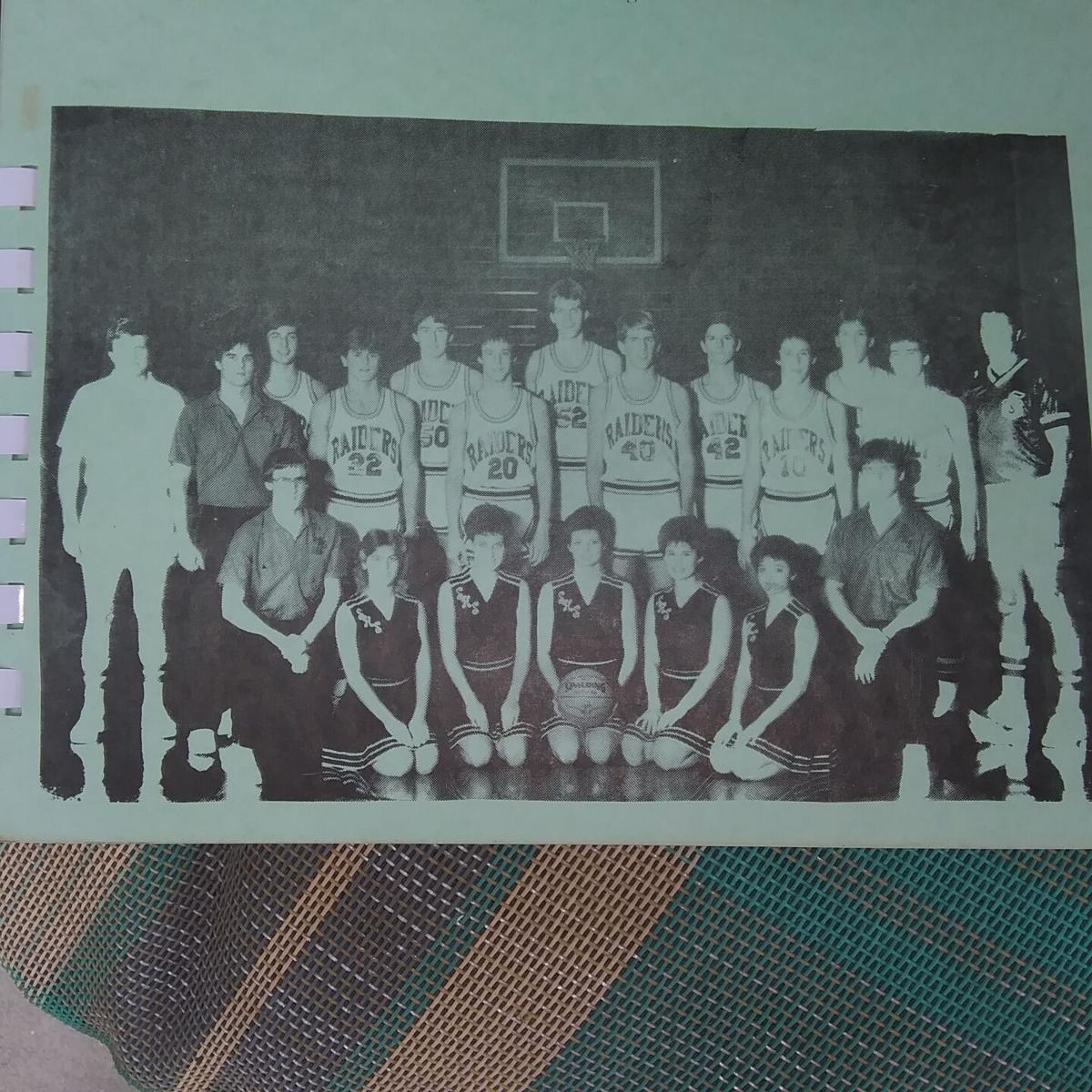 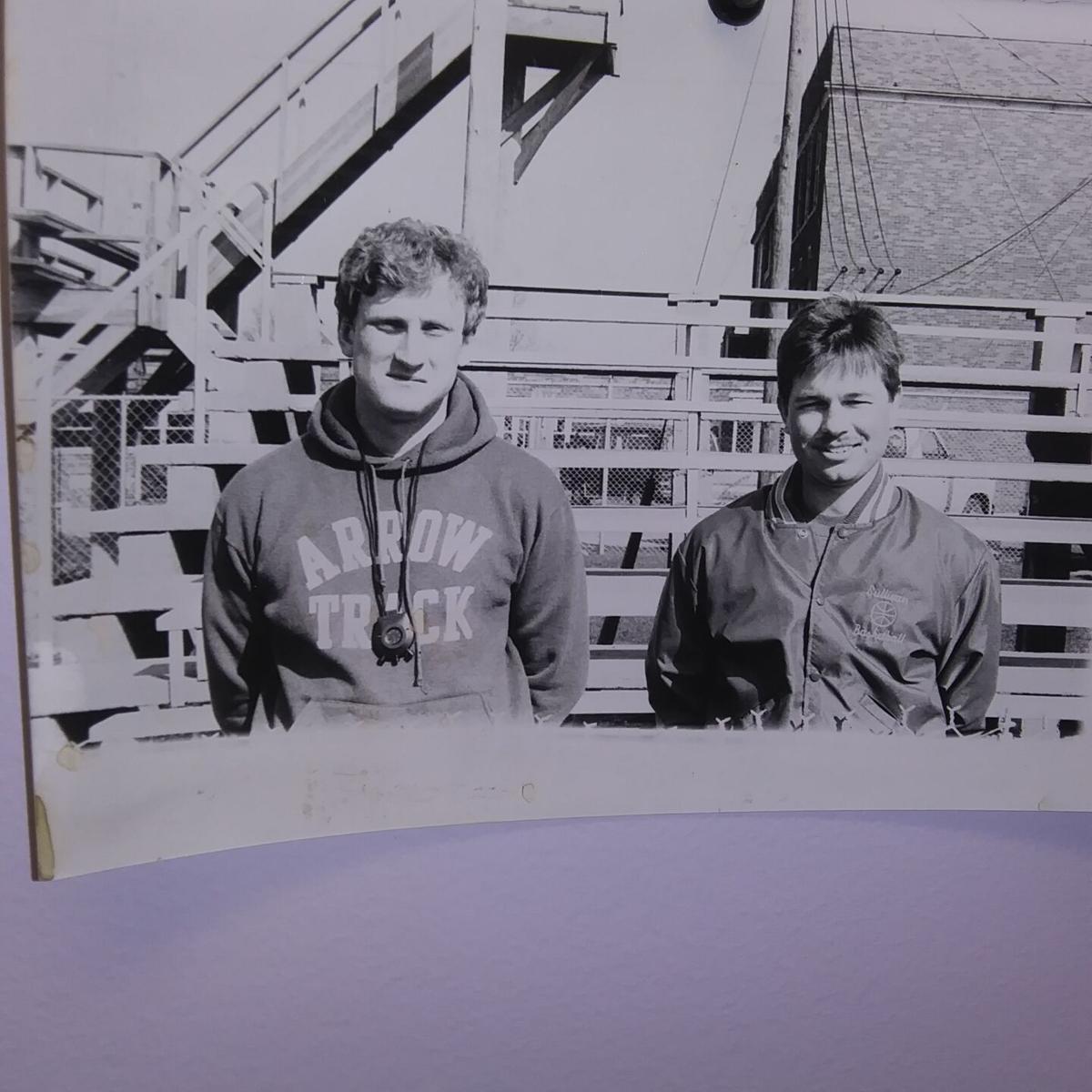 Sullivan agriculture teacher Jeff Miller, right, is shown with then Sullivan printing teacher Chris Stitzle in front of the football bleachers at Sportland Field. The picture is circa 1989, when Miller and Stitzle were co-coaches for the Sullivan High School boys track and field team.

Sullivan agriculture teacher Jeff Miller, right, is shown with then Sullivan printing teacher Chris Stitzle in front of the football bleachers at Sportland Field. The picture is circa 1989, when Miller and Stitzle were co-coaches for the Sullivan High School boys track and field team.

In the mid 1980s, those basketball fans from Greene County thought the world rose and set around the tiny L & M Braves. Shakamak graduate Jeff Miller was no different.

No one could blame Miller and others for being fans.

The tiny consolidation of Lyons and Marco, which took place in 1958-59, was taking the Indiana High School boys basketball world by storm. I would guess that L & M had no more than 200 students in grades 9-12, adding to their appeal in what some thought was the grand old days of the high school state tournament in Indiana.

The Braves featured the dynamic duo of Tony Patterson and Jeff Oliphant. They were so good that both earned full rides to Division I schools. Chad Grounds, one of the first high school players to essentially receive a medical redshirt, was a very good third option.

Patterson went on and played for coach Gene Keady at Purdue and Oliphant did the same at Big Ten foe Indiana and coach Bobby Knight.

“Patterson and Oliphant went on and became Indiana All-Stars,” said Miller. “That was unheard of at a school with 200 kids.”

After passing on an offer from Springs Valley, Miller accepted an offer to teach agriculture at Southridge High School in Huntingburg.

He knew very little of coach Gary Duncan and the boys basketball team at Southridge and the two-year run the Raiders were about to embark on.

As he was starting his career as an educator, which has included the last 35 years at Sullivan High School, his mind drifted back to that Braves team, coached by Tom Olliphant.

"I was single then and went back to watch L & M play eight or 10 times that season," said Miller. "But I also had the chance to watch Southridge play.

"They got off to a slow start, losing two of their first three games, But slowly they started putting it together."

The Raiders closed the regular season by winning 15 of 17 games, giving them a 16-4 record entering the tournament.

They drubbed Northeast Dubois, edged Perry Central by four before blowing out Forest Park 57-37 in the sectional championship game.

At the regional, they got past Washington Catholic 66-65 and then defeated North Harrison 51-48 in the championship game.

Then it was on to the Evansville Regional. Austin would play the Raiders in game one while L & M played Evansville Boose in the second game.

As fate would have it, Southridge cruised past Austin 79-54 while Bosse and the Braves hooked up in a racehorse classic in semifinal No. 2.

The Braves had an interesting path to Roberts Stadium in Evansville. They opened play at the Switz City (Central) Sectional, a few years before  L & M, Switz City and Worthington consolidated to become White River Valley, with a 110-58 victory over Eastern Greene and then beat the Bloomfield slowdown 26-13.

After winning the sectional, they beat Terre Haute South and Owen Valley at Hulman Center to take the Terre Haute Regional.

"Growing up going to the sectional to Switz City, I thought that gym was big," said Miller. "But it was nothing compared to Huntingburg Memorial Gym, which was more than twice as big."

The rumor was that the people of Huntingburg got tired of having to go to Jasper to play the sectional, so they built a gym bigger than the one at Jasper and one that would seat the entire population of Huntingburg.

A bold move, even for the 1950s when the gym was erected.

But playing the second semifinal game and having to play their starters until the very end against Bosse, L & M was exhausted and had lettle left as Southridge defeated the Braves 72-54, claiming their first semi-state title.

"Everybody has talked for years about how it might have been a different outcome if L & M hadn't had to play a tough game in the semifinals while Southridge cruised past Austin," said Miller, who was in the large crowd that March 1986 day in Evansville.

"L and M had Patterson and Oliphant but Southridge had a very good team. Todd Jochem, who I believe went and played quarterback at Rose-Hulman, was a very good player. Twin guards Rick and Ron Patberg also were good players. The (Andy) Nass kid was about 6-foot-9, but the rest of the kids were between about 5-11 and 6-2."

The more Miller watched coach Duncan and his Raiders, he knew they were something special.

"They were just a bunch of hard-nosed kids," he said. "They were very unselfish and played well together at both ends of the floor.

"Losing was not in their vocabulary. They would do anything to beat you."

Miller gained a great deal of respect for Duncan.

"I have watched and been around a lot of coaches, but I  know that Gary Duncan is the one of the best coaches, if not the best, I have ever seen,” said Miller. "Duncan might have had a hard time surviving today. He was not afraid to do something unpopular if it would help a kid or the team."

It was onto Market Square Arena and state finals for the Raiders. Miller watched as Jay Edwards and Marion dominated  the SHS 76-52 on the way to a state championship.

The Raiders finished the season with a 23-5 record.

SHS was loaded with juniors, the question around Dubois County was could the Raiders make it back to the Final Four?

The answer was yes.

Southridge did not have many close games in the tournament in 1986, but the only exception was a 55-53 win over the hated Jasper Wildcats in the sectional championship game.

The bad news was another date with Marion awaited them at MSA. This time it was much more competitive as the Giants beat Southridge 63-54.

When you don't win the ultimate prize, the accomplishments of very good teams can be overlooked.

"They made believers out of me," said Miller, "They went to the state in back-to-back years when it was a single-class tournament.

"Sure, Marion won it both years, but they were like a small-college team. They had Jay Edwards and Lyndon Jones, who both went to play at IU. But not many, if any teams the size of Southridge, ever did it."

Miller got an offer to come and teach at Sullivan in 1986.

"It was going to be a lot closer to home," he said. "But I had a great time at  Southridge. "Ray Roessner was the principal. He was a great guy.”

Miller said he started the same year that Chris Stitzle and Otto Clements did.

"I met Stitz before school in 1986 as we were getting our rooms situated," said Miller, who actually coached the boys track and field team with Stitzle in 1989 and 1990. "Stitz taught printing back then. Southridge was a long time ago, like when Stiz and I coached track.

"Those were some great days of high school basketball. It was so unique to be from Greene County and watch L & M ending up against Southridge at the semi-state. I remember getting to L & M hours before the game so I could squeeze into that tiny gym to get a seat. Those years at Southridge are full of great memories. I had no idea about coach Duncan and his boys but quickly came to appreciate their talent. I feel fortunate to have taught at Southridge, but have loved my time teaching, and yes a little coaching,  here at Sullivan."